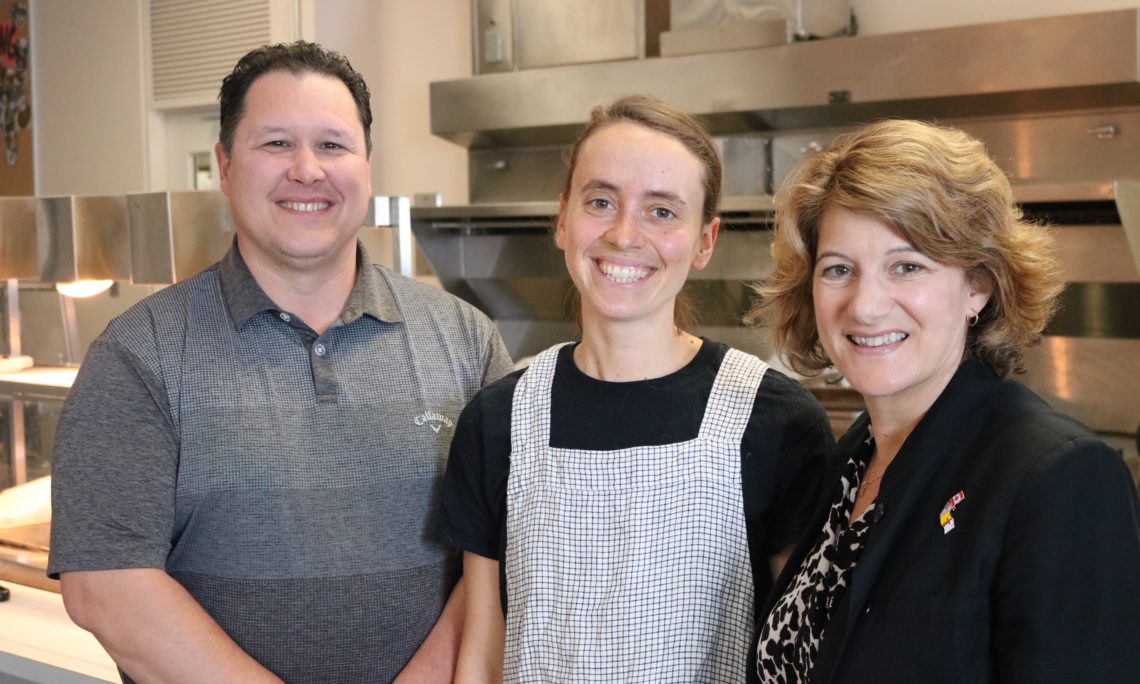 During her September trip to Iqaluit, Consul General Allison Areias-Vogel had the privilege of meeting Lael Kronick, who is fighting food insecurity, fostering good nutrition choices, and supporting student initiative and solidarity.

As a food studies teacher in Inuksuk High School, Lael Kronick recognized the important food insecurity issues in Nunavut, where 60% of children live in food insecure households. She noticed many of her students did not eat lunch due to the high food costs in Nunavut.  In November 2017, Lael and her students launched a largely student-run free hot lunch program focused on healthy meals with, when available, an emphasis on country food.

The program serves, three days out of the six-day school cycle, free lunches prepared by Lael’s students and served by student volunteers, part-time student employees, and teachers.  Even Principal Jay Thomas gets behind the counter serving up hot meals to hungry students, a time he enjoys as a way to interact with students outside of his traditional role.  The program also tries to source as much local food as possible.  Most ingredients used in the salads are grown right in the cafeteria, from a set of six hydroponic towers blooming with healthy greens like lettuce, kale, spinach, and bok choy.  Students not only help with cooking and cleanup, but also with nurturing and harvesting produce from the hydroponic towers.  The science section of the school is also raising chickens, whose eggs add welcome protein to the lunches.  The program is an undeniable success, serving 150 meals a day and providing training and life skills for students.

Funded by the government of Nunavut and Loblaws through organizations like the Nunavut Food Security Coalition, the program was launched with CAD $50,000. Lael is now hoping to raise more funding to maintain the program and expand it.

Thanks to this program, not only are students learning about food insecurity and food sovereignty, but the free meals also build community, uniting the kids around a delicious and healthy meal, and making sure the ones who could not always afford lunch are not stigmatized.  The school will be assessing the program’s impact on school attendance but Lael says she already sees a difference in class attendance and attention, as well as more interaction between students during meal and prep times.