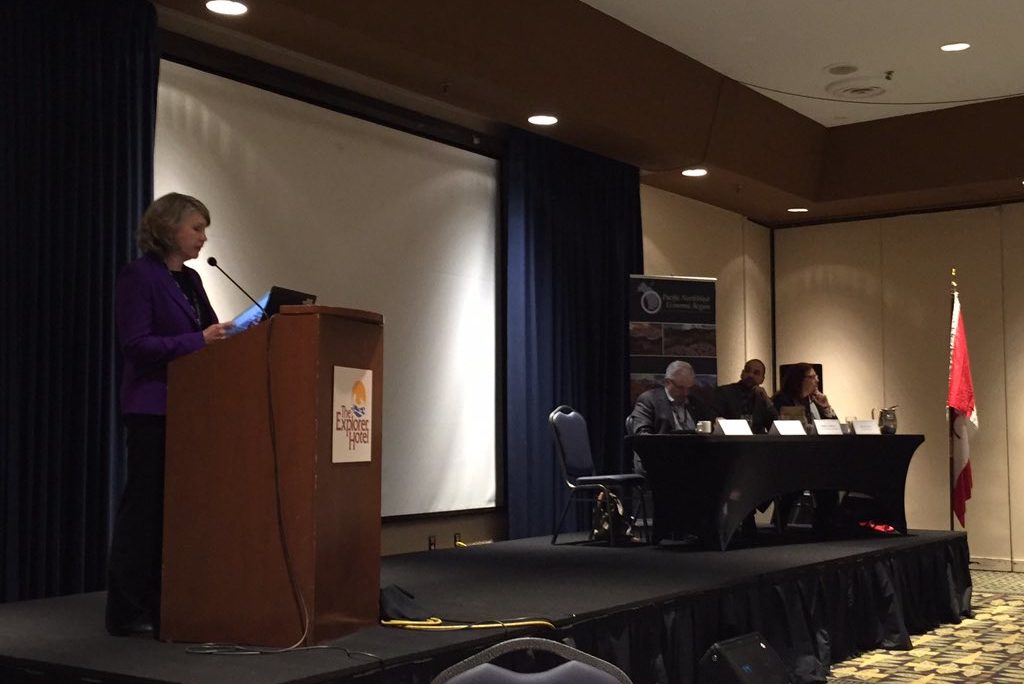 The week of November 16, Consul General Lynne Platt attended two separate events focused on Arctic issues, discussing the role of the United States-Canada partnership in responsibly and sustainably developing the Arctic. CG Platt traveled from November 14-18 to Yellowknife in the Northwest Territories for the Pacific North West Economic Region (PNWER) legislative legal assembly and economic leadership forum. At the forum, CG Platt moderated a panel on Arctic governance, which featured three panelists: Drue Pearce, a senior policy advisor with Crowell & Moring LLP, Bob Herron, a member of the Alaskan House of Representatives, and Martin Goldney, Deputy Minister of Aboriginal Affairs in the Northwest Territories. While in Yellowknife, CG Platt also visited the Legislative Assembly and experienced firsthand the Arctic-like climate of the Northwest Territories while engaging in bilateral discussions about Arctic economy and policy.

On Friday November 20th, CG Platt participated in a one day workshop entitled “The Arctic Council at Twenty: Permanent Participants, Arctic Policy in Canada and the United States, and Stewardship” hosted by the University of Washington in Seattle. CG Platt delivered a speech on U.S. Arctic policy and the role of the United States as the current Chair of the Arctic Council. Heather Nicol, the 2015-16 Canada Fulbright Chair in Arctic Studies at UW, and Steve Myers, of the Pacific Northwest Economic Region, moderated the panel, which in addition to CG Platt featured these panelists: Harkiran Rajasansi, Consul for Foreign Policy and Diplomacy at the Consulate General of Canada in Seattle; Jennine Jordan, Arctic Economic Council Representative of the Arctic Athabaskan Council; and Jean-François Arteau, former Executive Assistant to the President of the Makivik Corporation.