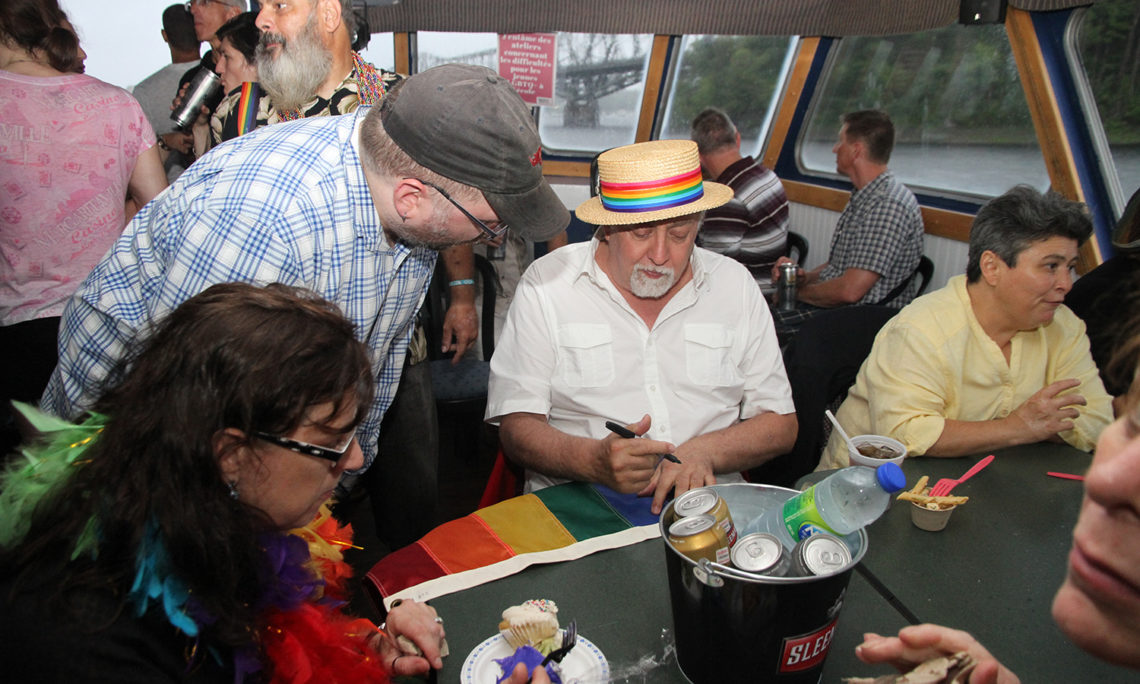 Although it rained stubbornly throughout the evening, the spirits of those attending Ottawa’s 30th annual Capital Pride activities Thursday night were anything but dampened. First on the Pride Boat Cruise, and later at a Human Rights Vigil, Ottawa’s LGBTI community turned out in impressive numbers to learn, celebrate, and reflect.

At both events, crowds had the opportunity to hear about the origin of the Rainbow Flag — one of the most iconic images in LGBTI culture — directly from the man who is famed for creating the flag, Gilbert Baker.

An American gay rights activist and artist, Baker is attending Capital Pride 2015 as a special guest of the Canadian Centre for Gender and Sexual Diversity (CCGSD) in collaboration with the United States Embassy in Ottawa, and is scheduled to speak at a number of Pride events throughout the week.

Baker praised the Canadian LGBTI community, who he says often offer encouragement to American activists: “We Americans have been so inspired by decades of work Canadians have done to make such a wonderful, open, free society, which has helped spur a lot of great work in the United States.”

As the maker of the definitive modern symbol of LGBTI Pride, Baker is most often asked about the Rainbow Flag’s history. He says the flag was inspired first by the universal nature of rainbows (the metaphor of “different colors united as one” made it an easy choice, he said), and second by the need to move beyond older emblems of oppression like the pink triangle, which the Nazis in World War II used to brand members of the LGBTI community. In its purposeful simplicity, the Rainbow Flag celebrates togetherness and human sexuality in equal measure.

Capital Pride 2015 will conclude festivities on Sunday, August 23, with an annual parade across Ottawa’s downtown core — a highlight throughout Capital Pride’s 30-year history. Baker says he looks forward to marching in the parade, and only asks that as spectators wave Rainbow Flags with pride, they take a moment to remember the millions of people across the globe who still face discrimination and violence every day because of whom they love.

It is impossible to predict whether the rain will stay away this weekend during the Capital Pride Parade, but if there is one thing Ottawa’s LGBTI community has become known for over the last 30 years, it’s resilience. Plus, after stormy weather sometimes comes a rainbow!