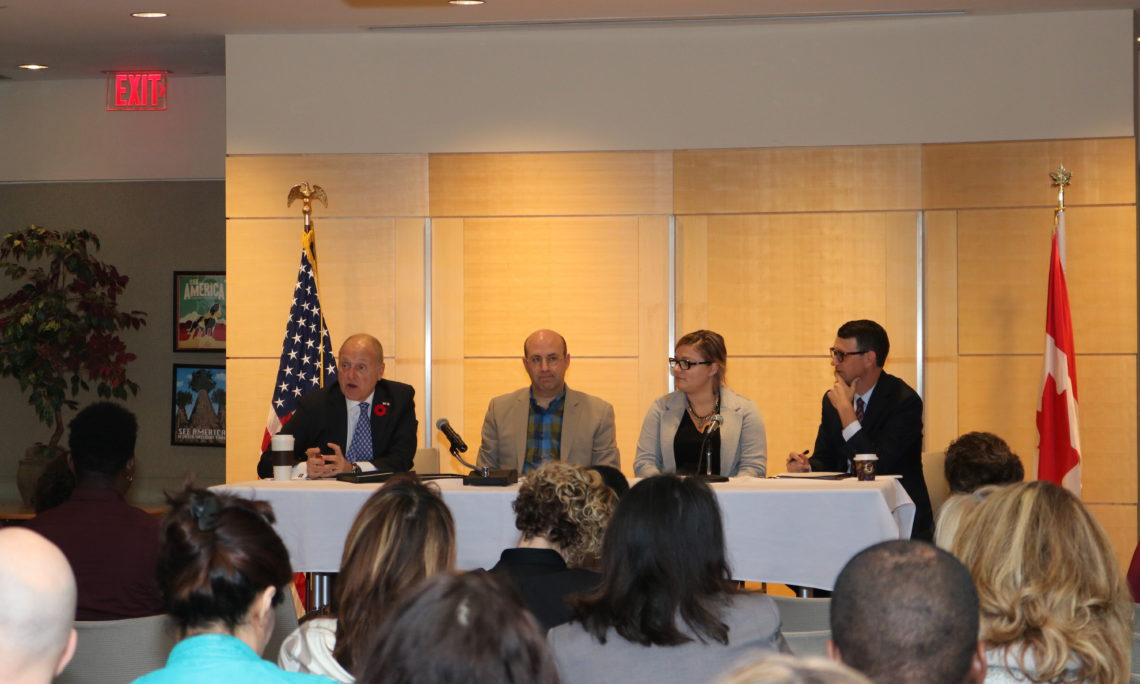 Thanks so much for joining us this morning to discuss human trafficking.

I am pleased to see such a broad mix of people, including parliamentarians, government officials, members of civil society, and law enforcement.  Welcome everybody.

In a way this event is quite timely. Last week Secretary Kerry participated in the President’s Inter-Agency Task Force on Human Trafficking. That group, which helps to coordinate the U.S. government’s efforts on trafficking, looks a lot like the group here today; a diverse group of stakeholders dedicated to this important cause.

As Secretary Kerry has so aptly put it, “the magnitude of the human trafficking challenge cannot be overstated.”

Sadly, this is a devastating reality around the world; the United States and Canada are no exception. Despite our significant efforts to combat human trafficking, we know that every year people are not only illegally trafficked across the U.S. – Canada border, but within our borders as well.  Women, men, and children are moved north and south, east and west, against their will, or under false pretenses, and exploited for their labor or for sexual purposes.

We know that in the United States and Canada, vulnerable people in search of legitimate work and opportunities can end up being exploited by unscrupulous people who prey on these vulnerabilities.

Within our countries, people are moved from city to city, state to state, and province to province.

And sadly, we know that in both our countries’ indigenous populations are far more likely to be trafficked than non-indigenous persons. We also know that victims of trafficking are predominantly our young people, especially our young women and girls.

Given all we know, it is imperative that we continue to come together in fora like this, within our own governments, and with our colleagues at the municipal, state, and provincial levels to consider how we can most effectively combat human trafficking. Each of our organizations works to address trafficking in different, but complementary, ways, and we recognize that for us to succeed in tackling this enormous problem, coordination and cooperation is essential. We must work together.

As Ambassador, I have the privilege of seeing how closely our two countries cooperate on a multitude of issues, ranging from the Counter-Da’esh Coalition to climate change to refugees; and I’m pleased that we are cooperating closely to combat human trafficking, as well.

I wanted to highlight a few things you may not know about how the U.S. and Canada are approaching this issue.

Bilaterally, our law enforcement and border service agencies have been working very well together.  These efforts manifest themselves through efforts like the RCMP’s Operation Northern Spotlight, which this year resulted in the arrest of 32 people across Canada for trafficking and luring children. This coincided with a similar operation the FBI led in the United States that resulted in the rescue of 82 minors and the arrest of 239 traffickers and their associates.

We are also working on trafficking trilaterally with Mexico. At the North American Leaders Summit here in Ottawa last June, our governments committed to implement coordinated public awareness campaigns with the private sector to prevent trafficking. Additionally, federal officials from our three countries that work on human trafficking meet on an annual basis and earlier this year Mexico convened the first trilateral meeting for federal prosecutors.  So we’re working together across agencies and governments.

We are also working cross-border to foster ties between states and provinces to address trafficking.  In September, our consulate in Winnipeg and our Public Affairs Section sponsored a dialogue on human trafficking with officials, law enforcement, and NGOs from Manitoba and North Dakota. The event, which we believe was the first of its kind, was organized by the Canadian Centre to End Human Trafficking, and had immediate results on a smuggling case. It also helped spur a new investigation into a potential cross-border smuggling ring.

Finally, I’ll note our work with service providers that work directly with trafficking survivors.  This year the embassy will sponsor a program that will send Canadian service providers to the United States to consider the long term links between human trafficking and disabilities, such as post-traumatic stress disorder.

Each of these efforts demonstrates that our coordination and cooperation can produce results that prevent trafficking, help victims, and pursue justice.

Let me close by simply thanking you for the work that you do.

President Obama has called the work to end human trafficking, “one of the great human rights causes of our times.” Your dedicated work, alongside the efforts of others, is key to our common efforts to protector our citizens and end the scourge of human trafficking. As such, I thank you for your efforts in this struggle and I appreciate you taking the time to come this morning to share your experience, expertise, and passion with us.