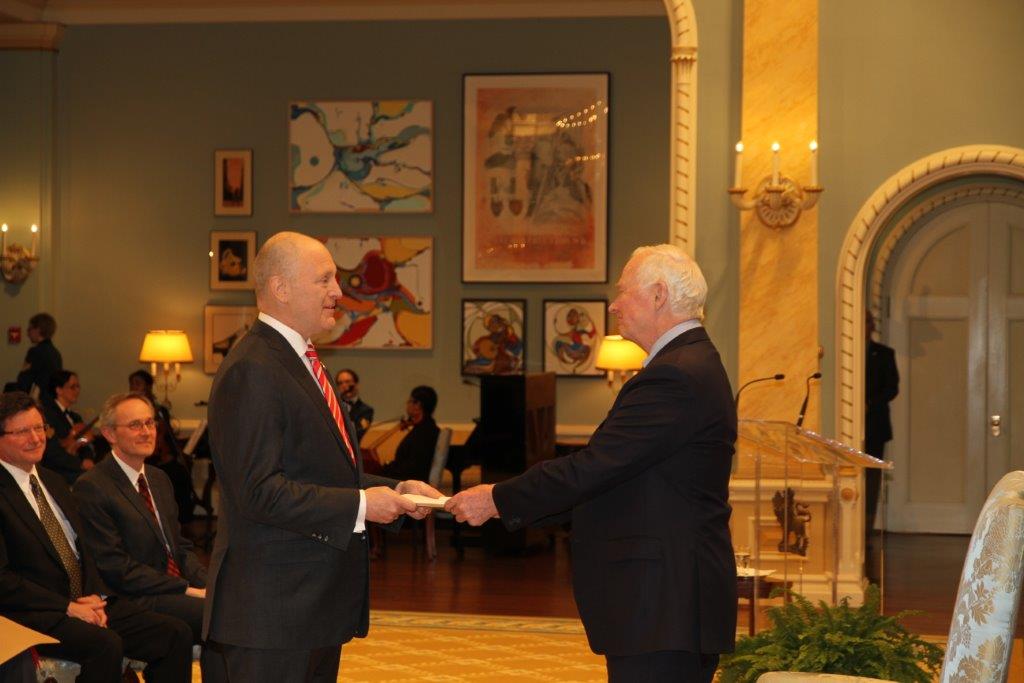 Ambassador Heyman presents his letters of credence to His Excellency the Right Honourable David Johnson.

“I come with a message from the American people to all Canadians: Thank you.”

In remarks to the media following the ceremony, Ambassador Heyman said that he bore a message from the American people to the Canadian people: simply stated, “thank you.”

“Thank you for the incredible relationship we have had for so many years. Thank you for being our friend. It’s sometimes difficult to be a friend, and we are deeply appreciative of Canada always being there with us.

“Thank you for being such an incredible neighbor. We have a complex border with over 5500 miles, hundreds of thousands of people cross each day. I appreciate it, and the American people appreciate the relationship we have at the border.

“Thank you for being a true ally. We’ve been on the battlefield together, shoulder to shoulder, and we’re very appreciative of that. We’ve also been arm and arm diplomatically every day doing things around the world, fighting for the ideals and the democratic beliefs that we have.

Calling the bilateral relationship the strongest in the world, Heyman vowed, “to work with [Canadians], to build on the enduring relationship that we have, the relationship that has been there for many, many years and is deep and wonderful. I look forward to, working with all of you every day, and I’m going to commit over 100 per cent.”

Ambassador Heyman enthusiastically looked forward to travelling throughout Canada with his wife, Vicki Heyman, to experience the beauty of the country and meet more of the Canadian people.

Following his statement, he answered questions from the media on current issues facing the bilateral relationship as well as his priorities for his time as Ambassador.