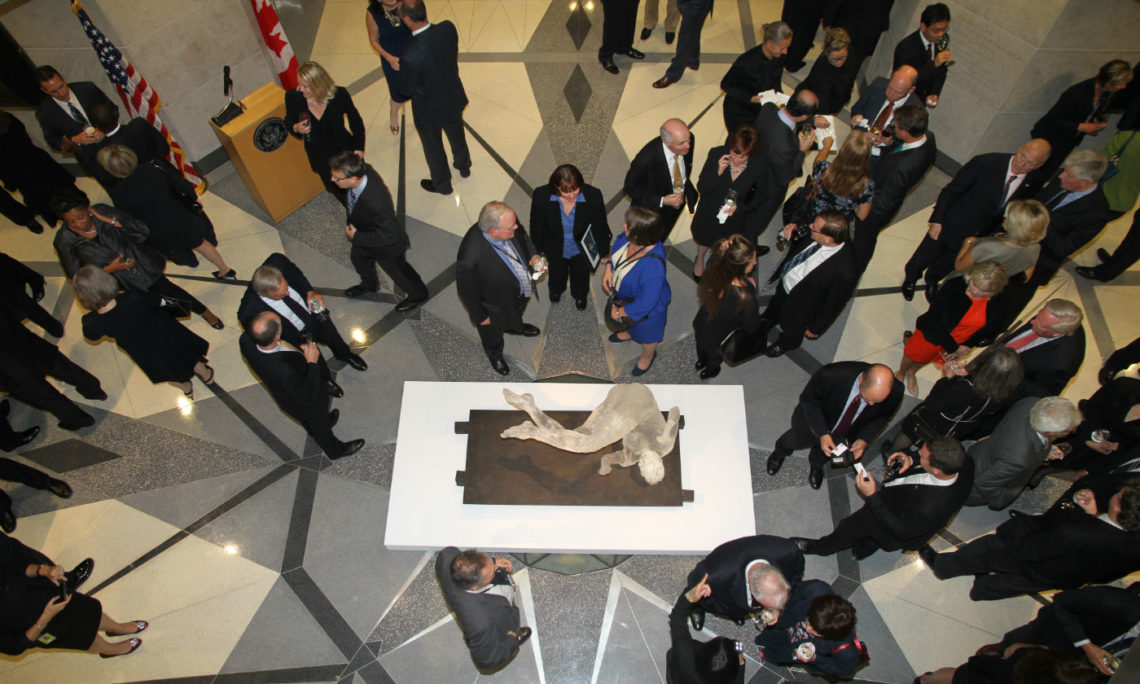 Eric Fischl's Tumbling Woman acts a a centrepiece at a reception for the 9/11 Memorial and Museum at the U.S. Embassy in Ottawa.

On Wednesday, September 30, Ambassador Bruce Heyman and his wife, Vicki, hosted a reception at the Embassy to introduce the National September 11 Memorial & Museum in New York City. U.S. embassies around the world have held similar receptions in partnership with the 9/11 Memorial & Museum to raise awareness about the museum, which officially opened in May 2014.

At the center of the Ottawa reception was “Tumbling Woman,” a sculpture by New York artist Eric Fischl. He created the work as a tribute to those who perished in the World Trade Center on 9/11. The sculpture will remain on display at the Embassy until late October.

Ambassador and Mrs. Heyman welcomed almost 200 guests to the reception, including members of the diplomatic corps and representatives of trade, political, cultural, and media circles. The Heymans spoke about the legacies of compassion and resilience that emerged from the tragedies of 9/11. Joe Daniels, President and Chief Executive Officer of the 9/11 Memorial and Museum, also spoke, introducing the institution and its connections to Canada. Daniels has been responsible for directing the planning, construction, and development of the museum since 2005.

The 9/11 Museum is located at the heart of the World Trade Center site and serves as a place of remembrance and tribute to those lost in the attacks. The Museum honors the more than 3,000 people who lost their lives in the terrorist attacks on the World Trade Center on September 11, 2001, and February 26, 1993, and documents both the impacts and implications of these events, as well as providing a link to the events through displays and interactives. For more information on the Museum and Memorial, visit www.911memorial.org.