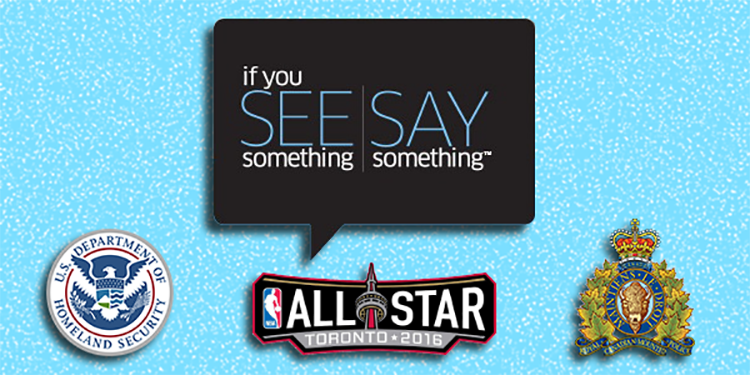 “We thank the Royal Canadian Mounted Police for their partnership on the “If You See Something, Say Something™” campaign and for helping to ensure that all fans, players and employees at the 2016 NBA All-Star Game had a safe and enjoyable experience,” said Deputy Secretary of Homeland Security Alejandro Mayorkas. “We will continue to work to expand this important public awareness campaign to ensure the safety and security of our communities.”

“National security awareness should be everyone’s concern, which is why we are pleased to partner with the U.S. Department of Homeland Security and the National Basketball Association to encourage people to be vigilant and report suspicious activity to local law enforcement,” said Royal Canadian Mounted Police Assistant Commissioner James Malizia, Officer in Charge of Federal Policing Operations.

Fans and visitors to the Air Canada Centre could see the “If You See Something, Say Something™” message throughout the games on the Jumbotron as well as on the ribbon board.

The Department launched the “If You See Something, Say Something™” campaign nationally to raise awareness among businesses, communities, and the general public about how they can remain vigilant and play an active role in keeping the country safe. The campaign has grown to include partnerships with numerous sports teams and leagues, including with the National Football League, where materials were on display at Super Bowl 50, NASCAR, MLB, and the NCAA.

The “If You See Something, Say Something™” campaign was originally implemented by New York City’s Metropolitan Transportation Authority and is now licensed to DHS for a nationwide campaign.