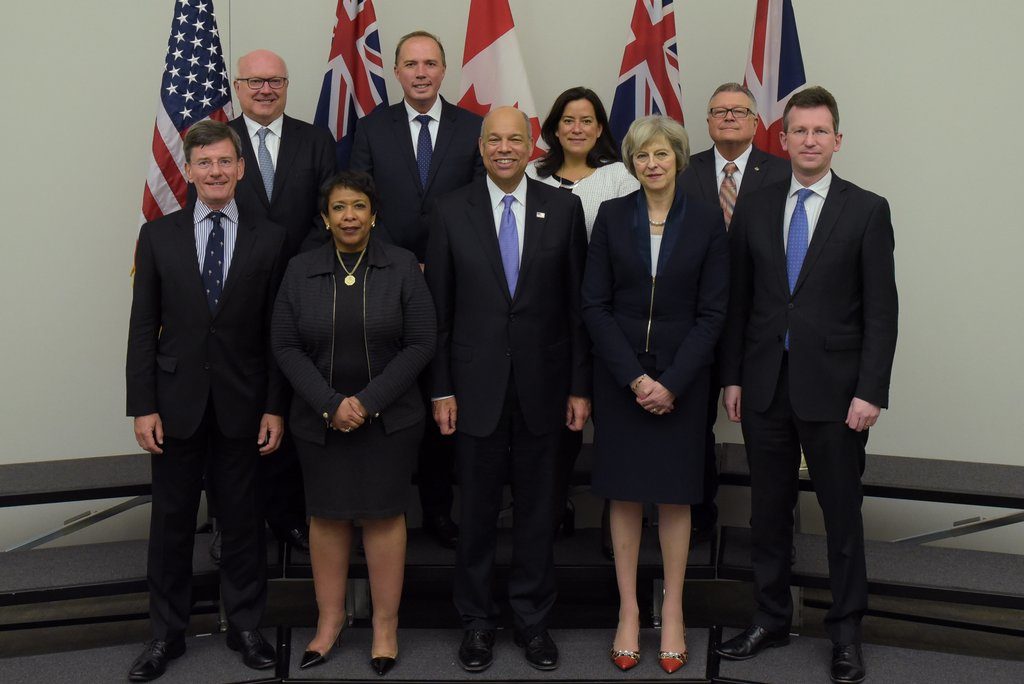 On the first day, the Attorneys General and Ministers jointly discussed a range of topics including: information sharing for counterterrorism purposes while respecting privacy; countering violent extremism; cybercrime; encryption; and foreign investment in critical infrastructure. They agreed on the importance of expanding efforts to counter the threat of Daesh, al-Qaeda and their affiliates particularly by strengthening border and aviation security. They also agreed that violent extremism poses a critical threat for all five countries and decided to coordinate activity to counter violent extremism, including by engaging with communities and with social media and other high-tech industries. They further agreed to share best practices and evaluation of the impact of this work. They also agreed that while Government engagement is important, government itself cannot and should not be the only actor to counter violent extremism, and needs to partner with communities to reach isolated and vulnerable individuals and address the drivers of extremism in our societies. While recognizing the value of strong encryption and the need to protect civil liberties and privacy rights, Attorneys General and Ministers shared concerns about the challenges encryption presents to law enforcement agencies seeking to fight terrorism and serious and organized crime.

On the second day, the Attorneys General of the Quintet met separately to discuss cybercrime, criminal justice reform, and the need to uphold the rule of law and individual liberties in the face of national security threats. They shared their countries’ experiences concerning reforms to national security laws and reaffirmed the critical importance of meeting security imperatives while protecting civil liberties. The Attorneys General agreed to continue to discuss the application of the international law requirements for self-defense, including imminence.

On the same day, immigration and national security Ministers met separately and recognized the benefits of legitimate travelers and migrants and discussed ways to address challenges posed by mass migration and refugee flows, information sharing to facilitate travel and to enhance each country’s ability to identify and prevent the travel of criminals and terrorists across borders, and ways to enhance visa processes for certain travelers. The Ministers also recognized the value of trusted traveler programs.

The Attorneys General and Ministers agreed to continue discussions on enhancing cooperation on screening of refugees and asylum seekers. They agreed to explore opportunities for greater sharing of security and law enforcement information amongst the five countries.

The Attorneys General and Ministers reaffirmed the importance of working collaboratively on law enforcement and national security issues. They agreed to continue to coordinate efforts to more effectively address issues of mutual concern, and to ensure the security and prosperity of our citizens consistent with respect for individual rights and freedoms.